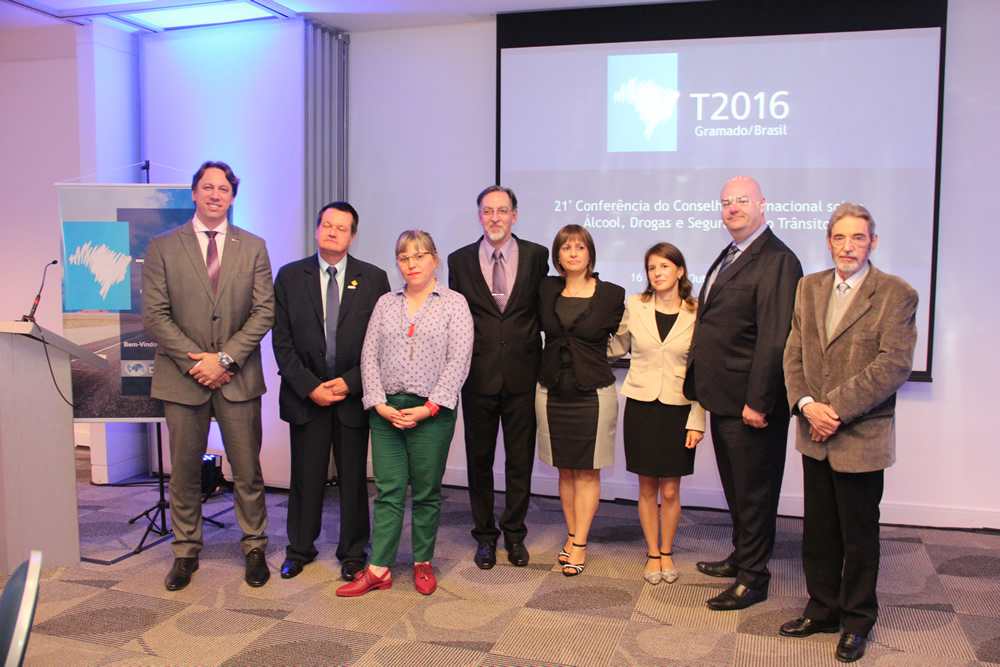 Scientific Committee and Representatives of ABRAMET

The Chairs of the International Council on Alcohol, Drugs and Traffic Safety (ICADTS), the Center for Drug and Alcohol Research of the Hospital de Clinicas of Porto Alegre and the Federal University of Rio Grande do Sul inaugurated last Wednesday, 28th of October to the kick-start preparations for T2016.

In its first Latin American edition, T2016 will occur between October 16 and 19 of 2016 at the Wish Serrano Resort and Convention, in Gramado, Brazil. The last conference was hosted in Brisbane, Australia, with representatives from 39 countries. Brazil is the first developing country to host this event and discuss the matter at the global level.

According to the Director of the Center and Chair of the Conference, Flavio Pechansky, the event in Brazil stresses the need to build solutions that strengthen actions of traffic safety in developing countries, considering that in the last decade the number of accidents has not decreased and traffic safety problems still persist, with a strong impact in health politics. Dr. Pechansky foresees that T2016 will have a large influence from national and international participants, who are interested in discussing and disseminating information that will help reduce mortality and morbidity related to substance use among drivers. “The “Dry Law” culture, campaigns to prevent risk-taking behaviors, encourage discussion about the use of drug detection devices, and engage other measures for conscious driving. However, it is known that demands and solutions are different across countries, which reinforces the need to debate and discuss these issues, with hope of subsequently advancing scientific research and reinforcing public policy.”

Also present at the event was the Director of the State Department of Transportation, Mr. Hildo Mário Szinvelsky, the president of the Instituto Zero Acidente, Carlos Tatsch, the spokesperson from the Federal Highway Patrol, Mr. Alessandro Castro, the Scientific Directors of the Brazilian Association of Traffic Medicine, Abramet Rio Grande do Sul and Dr. Ricardo Hegele, as well as the President of Abramet RS, Dr. Trajano Henke. Diza Gonzaga, President of the Thiago Gonzaga Foundation, Dr. Patrícia Sandri, President of the Brazilian Association of Traffic Psychology-RS, and Traffic Agent Marcelo Cunha da Silva were also present, among other guests.